The Real School LIttles has been meeting all (long, hot) summer. 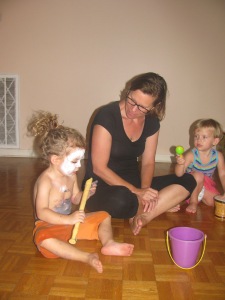 Tuesday afternoons have been “Meet with the Bigs” Day, dropping in on the older kids wherever they were (usually Carol’s home), where the Bigs were swimming, taking yoga, or playing video games.  The Littles tended to gravitate to the train set.  These were awesome afternoons of conversation with Pravin and other parents about the needs of the older and younger people and observing how they interact.
Thursdays we usually met at Cara/Ani/Andrew’s home, Miriam’s home, and once at Angelique’s.  Early in the summer, we were meeting at parks, etc., but it just became too hot for it to be enjoyable.  Meeting at homes allowed the parents to relax a little and really talk and bond and to practice “strewing” with the kids — we “strewed” cooking stuff (with real ingredients and utensils) music, art, water play, outdoor play (play fort, sandbox, trampoline), gardening, reading, trains, and even a shot of movie watching (a love of Sophie’s).  In other words, everyone got to play a lot, together sometimes, other times not, but in an environment of adults who said “yes” a lot and allowed the children to play freely, messily, scarily, and joyfully, as long as they wanted (one afternoon we ended up going until 10pm).  The kids were allowed to work out issues without parents jumping in and “fixing’ everything and without shaming for being toddlers who manage conflict in a toddler way.
The core group has been consistent:  Cara/Ani (and sometimes Andrew and Sophie), Anglelique/Nora/Tera, and Miriam/Noam, and the consistency and frequency of meeting has allowed the kids to really start to bond and know each other.  We had many awesome folks be able to stop in for a visit or two, but would love for more to be able to get together on a regular, consistent basis. The consistency has also allowed the parent to bond, feel less self-conscious (we all come from a larger environment where we can sometimes feel judged for allowing our toddlers freedom), and support each other on this journey in real ways.
The Littles Facebook group has been a great resource for sharing thoughts and information and staying connected.  We hope more folks will become a part of that and we can eventually retire the Yahoo group.
Recently, the energy of the group has stepped up a bit with folks coming back into town, some additions from the Happy Ones (Attachment Parenting group) and increased interest after Krenie’s talk in July.  The next big event is the Rethinking Everything Conference at the beginning of September,  Then, with the Real School building being occupied and ready for use now, the Real School Littles now have a regular “home” to meet in and we expect this next year to be very interesting as we work out the needs of the group.  Sometime in the Fall, with the help of some of the Big Kid parents, we hope to hold a Saturday Open House/Discussion about unschooling and the Littles.  We will be looking for input on that.
Advertisement

Come Be a Part of Our School

We're a non-hierarchical learning environment,
where kids are free to make their own choices.

Support TRS. All donations are welcome.

Home of The Real School